The multiverse of Legends of Aria is built on a philosophy of creating living, breathing worlds. Unlike other games where quests are eternal, or special events can be relived again and again, Legends of Aria is a game in which actions have real consequences.

You can talk with the NPCs about the latest gossip, hints for adventures, or about the weather. Walk away, and you might find them already moving on to visit the pub or talking with another NPC. Everything is in motion.

Coupling dynamic behavioral systems with real players and gods gives us incredibly rich opportunities for cause and effect. The egg you steal from a dragon today may be the reason she’s attacking a town you left behind tomorrow.

In Legends of Aria, if a tree falls in the woods, we can prove it made a sound.

Most MMOs use a class based character development system. What happens in most MMOs when you realize 20 levels in that you don’t like playing the class you chose? Well either you start over from scratch, or you quit the game.

Legends of Aria removes these restrictions on character development by focusing on skills as the core aspect of character development. When you first create your character, you only have the basic knowledge of swinging a weapon. Learn new skills from a trainer in town, read a dusty tome found in the depths of a dark dungeon, or learn them from another player who has already mastered them.

Once you have learned the basics of a skill, you can begin to earn experience towards it by engaging in activities related to that skill. As you advance, new abilities will unlock.

There is a limit to how much skill one mortal can possess which forces you to specialize. Upon reaching your skill cap, you will need to deactivate certain skills in order to gain in others.

A Legends of Aria server (both official and community run) are comprised of a collection of world regions. . These regions (game worlds/maps) are connected together using our ‘Cluster’ technology. Once connected, players can use portals, both static and dynamically created, to travel between them.

All regions within a single server must run the same rule-set or “mod”. This enforces fairness since player characters are also tied to that server. It would not make sense to be able to bring a character that is fully geared from a region with easy rules to a region running a hardcore rule-set.

The ‘Cluster’ servers are provided by Citadel Studios and use a simple web interface for managing the cluster. Through this interface, you can select the rule-set, change settings, add regions to the cluster, and manage god users.

Clusters can have any number of regions connected to it. This way you can decide which maps are available to explore. Want to run a steampunk only cluster? Want to run 10 versions of the fantasy home world Celador? (think of them as alternate realities) It’s completely up to the players that run the server.

Our top priority with player run servers is simplicity. This is the first step to putting all the power and freedom of Legends of Aria squarely in the players hands.

Mortals are not the only living creatures in the many worlds of Legends of Aria. There are those who have escaped the icy grip of death; those who have unlocked ancient and divine powers. These immortals and gods oversee and shape the mortal realm.

There are many classes of immortals in the Legends of Aria multiverse. Normal players who ascend to immortality interact with the world on a completely different level.

Immortals trade the foolish desires of mortals for new powers. They can change their form or become completely invisible, and instant teleportation is trivial.

Even still, there many entities more powerful than immortals. The first of such are demi-gods. demi-gods have complete control over the objects, life forms and events of their home regions. Here is just a small sample of the powers that gods will wield: 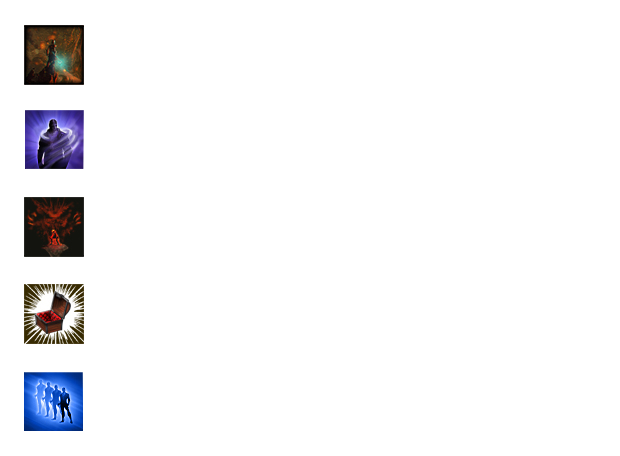 Server gods are in control of every region on the server. In addition to having god powers on every single region in the cluster, they can control the cluster from the web interface.

This system of moderation allows you to stay completely in character in game while still providing you with all the tools you need to create engaging game worlds.

In addition to the official rule-sets provided with the game by the Citadel team, players with the desire to mod the game will create custom rule-sets. Just like mods for other games, these mods will be posted online for other players to use on their clusters. While truly adventurous modders may build an entire rule-set from scratch, most custom rule-sets will be variations of one of the official rule-sets.

Our primary goal with the modding system is to allow for easy creation of simple mods while still providing ways to allow the modder to go as deep as they want. There are many layers to the customization of Legends of Aria.

The most simple way to modify a rule-set is through the creation and manipulation of world objects. World objects are permanent objects that always exist in the world. A common object type is a spawner. These spawn other objects in the world such as NPCs, monsters and treasure chests.

Every single object in the game world is created through the use of object templates. These templates define the properties and behaviors of those objects. There are so many things you can create just by manipulating these templates. Here are just a few examples:

At the core, nearly every aspect of gameplay is defined by behaviors written in the Lua scripting language. Even the entire combat system including skills and abilities is defined with behaviors. Here are some examples of things you can change in script:

We at Citadel Studios are really excited to see what players will come up with using custom rule-sets.

Admins will customize their world without ever logging out. From creating portals, to monster spawners, to even custom NPCs with their own stories, every single shard will have its own stories and encounters for players to experience. This level of world customization will require absolutely no technical knowledge or artistic skills.

At some point during Alpha, we will begin to roll out the ability for player run servers to use custom assets. Modders will use the Unity editor to create new items, equipment, monsters and even completely new maps. These custom assets will be automatically synced down to the player when they connect to a server running them. This will take modded shards to a completely new level.