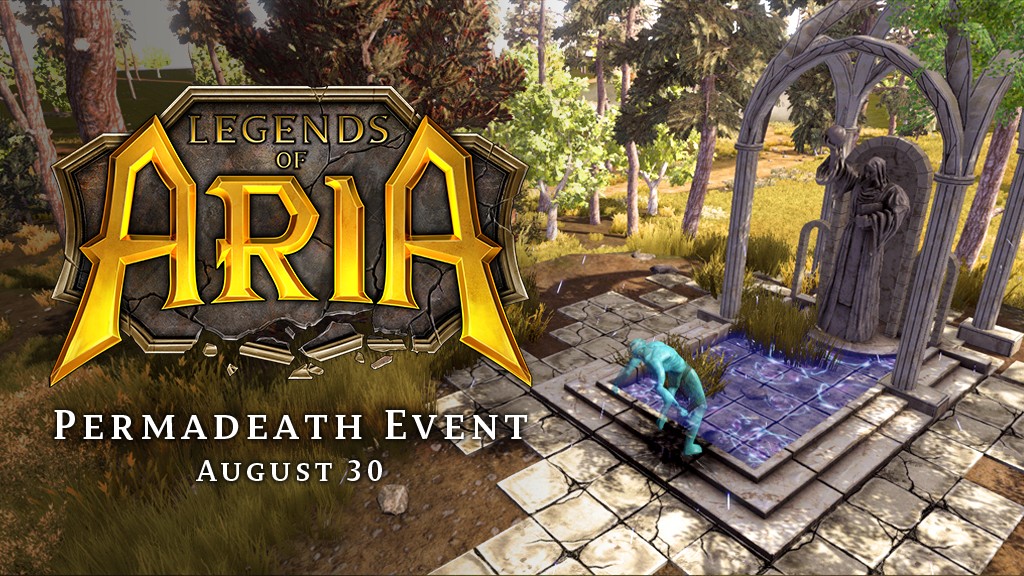 Another week, another live event! For this one, you are invited to try out a modded ruleset, a thing for those who helped us reach a stretch goal on Kickstarter. This is a plug and play option for a future community server.

We’ve seen people talking for years about how the ultimate in committed PVP is permadeath. If your character dies, it stays dead. (This is why supporting independent developers is such a rush — who else is going to try such a thing?) We think we’ve come up with something that makes it compelling and fun. Read on, and then come give it a try this Thursday, August 30, from 2:00 to 7:00 PM EDT (7 PM to midnight UTC). Be sure to join Supreem on the live Twitch stream: https://twitch.tv/legendsofaria

Note: Everyone who attends will receive a loyalty point reward equal to the number of people on at the peak attendance point of the event. We do plan to leave the server open all weekend so everyone can give it a try, but rewards are only for people logging in during the event.

In this mod, death is final but much less common. NPCs and monsters can incapacitate you, but not kill you. For player versus player encounters, there’s something called Savior Points.

Every character starts with two Savior Points, which happens to be the maximum you can have. The system can take you as low as -12. You lose a point every time you’re knocked unconscious, and [EDIT, 8/30/18] as you earn experience points, you regenerate any missing Savior Points.

If you have one or two Savior Points when you’re down to zero hit points, you’ll be unconscious. Other people can loot your body when you’re in that state, but eventually, you’ll be able to get up (with or without being bandaged by another player).

If you have negative Savior Points when you get down to zero hit points, you’ll be incapacitated. You will eventually die unless another player chooses to bandage you.

Execution is a thing in PVP combat! All players have a built in ability that allows you to execute another player. If the player is incapacitated, execution results in permanent death and the deletion of the character. If the player is merely unconscious, execution will remove another Savior point (in addition to the one they lost from getting knocked unconscious) and they will automatically respawn at a safe location.

If you execute a player, you lose six Savior Points.

General Notes For the Event:

* The Karma system is turned off.

* Your name color is a reflection of how many Savior points you have.

* When you are permanently killed, you drop a gravestone and you are shown a game window that displays your stats. (Time alive, number of times revived, number of executions etc)