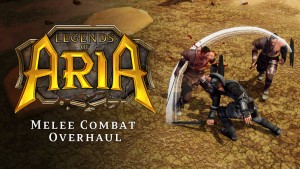 This patch has a wealth of important changes which will change combat in many respects. (Check out the notes here.) These changes have been building over many months internally, and have been heavily inspired by player feedback The goal of these changes has been to solve three distinct problems:

From Agility to Stamina

Stamina now takes the place of Agility in combat calculations for swing speed and movement speed. As Stamina is inherited from Agility, this is a like for like switch in some respects; however, things start to change as player characters become exhausted during combat.

Stamina now regenerates extremely slowly and is regained by consuming stamina potions and resting at a campfire. Primary and secondary weapon abilities now cost substantially less to use, and Bleed, Stun, Mortal Strike and other powerful abilities now leave the victim immune to that attack for a 12 seconds.

The large Stamina pool available and relatively low cost of weapon abilities allows players to be situational in how and when they spend their Stamina. In many ways, this is comparable to how a Mage relies upon mana. The crucial difference is that a warrior is far from useless when his stamina is exhausted, but instead operates at a reduced capacity.

Swing speed has a fairly straightforward translation. 50 Agility grants 100 Stamina and offers the same swing speed bonus as prepatch. Reducing your stamina to 0 will result in a swing speed equal to that of a 10 Agility character. Similarly, players at 100 Stamina will experience a maximum runspeed of 120%, whilst a player with exhausted Stamina will receive only 90% runspeed.

Critical hits were implemented to tackle one problem: The need for spell interruptions. Going into our combat design, we knew we wanted a high hit rate and thus could not rely upon standard hits to cause spell fizzles, as this would make casting spells virtually impossible. Critical hits were born and naturally took on a higher damage output, reducing regular hit damage to compensate.

What we have found both in our testing and in feedback from players is that weapon damage has suffered from its wide distribution, critical hits have failed to have the intended interrupt impact due to their random nature, and melee characters themselves find the reliability of damage too low and the spikes too random.

For these reasons, critical hits have been removed and standard weapon damage has been raised to a competitive level.

The result of these changes are that combat between warriors and mages becomes much  less random, damage is predictable and the dynamics between spell interruptions and a warrior’s special abilities feature strongly in the ebb and flow of combat. Warriors can prevent a mage from casting, but doing so will come at the cost of his/her stamina and combat efficiency.

Mortal Strike delivers 50% of normal weapon damage and renders the target unable to heal or be healed for 8 seconds. 8 second immunity timer upon removal.

Marking a player character renders them unable to hide or become invisible for 2 minutes. All projectile damage is also increased against the target by 25%. Hunters Mark is the replacement for Snipe.

Vanish immediately puts a character into stealth. Vanish removes all debuffs and negative effects active on a player (including Hunter’s Mark). Vanish is the replacement for Backstab.

Two other major tweaks to our combat balancing is the reduction of the potion cooldown to one minute and the addition of Stamina & Mana potions. Coming in the same lesser/regular/greater varieties as heal potions, these player-crafted potions will create meaningful choices in combat.

Archery now allows for more mobility through allowing the swing reset timer to run whilst the character is in motion. This means that you no longer have to remain stationary for the full length of the swing timer to get a shot off. Standing stationary for 1 second is enough time to notch and loose an arrow, provided your swing timer has reset.

With critical hits now gone, heavy and light armor have been reworked to operate as proficiencies in either armor type. Only Grandmasters in a chosen armor type will receive the full benefits of its defence rating.

The Will stat now confers a chance to resist any ability which results in a lasting effect, notably Bleed, Mortal Strike, Paralysis and Hamstring.

We’ve begun the final implementation for our fast travel system. Celador will soon be densely populated with player housing, and it’s important that our fast travel system accommodates the social interactions that will make the world livable. We also want to ensure that fast travel is not a cheap and frivolous feature, but one which is accessible to warriors and mages alike.

We will need plenty of testing and feedback, but this represents an important step in the development of the game.